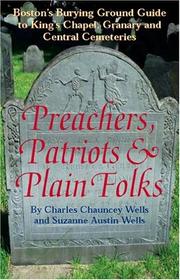 Preachers, Patriots, & Providence is a journey—a journey of America’s identity, a journey of discovery, and a journey of truth. While this is not a comprehensive history encompassing the entirety of Christianity’s influence in America, it is a factual series of events emphasizing Christianity’s role in the founding of this great country.   Talk about a book that is well researched! This book is just packed full of information of three cemeteries in Boston. King's Chapel, Granary, and Central Cemeteries are all discussed. The most notable people buried in each cemetery are mentioned, along with pertinent information about that person. "Preachers, Patriots & Plain Folks: Boston 5/5. The title of this volume actually reflects the three burying grounds since the preachers and early divines of Boston tended to be buried at King's Chapel, the patriots are found at Granary, while the plain folks ended up at Central. Books By Charles Chauncey Wells Preachers, Patriots & Plain Folks Jan 1, by Charles Chauncey Wells Paperback. $ $ 2 99 (3) Boston's Copp's Hill Burying Ground Guide (Copp's Hill) Dec 1, by Suzanne Austin Wells.